Recently, a class of materials with novel electronic properties at the surface has been predicted. The so called topological insulators show a unique electronic structure at the surface. The surface states of these materials show a linear dispersion and the spin degeneracy of the bands is lifted. In addition to that the number of fermilevel crossings at the Gamma point is always odd. The structure therefore resembles a Dirac-Cone. This band-structure is famous in graphene, but here we have the advantages of a small parallel momentum of the electrons. 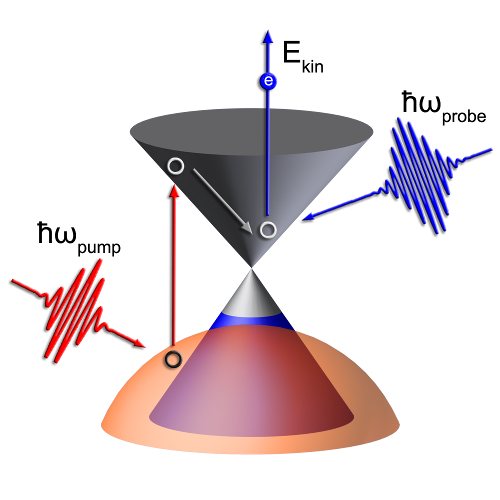 Sketch of the a typical 2PPE experiment of a topological insulator. A low energy pump photon excites electron from the occupied bulk bands (orange) into the unoccupied part of the topological surface state (grey). The excited electron is scatterd to lower energies inside the dirac cone and then photoemitted by a second probe photon. The photoemitted electron is further measured by an hemispherical electron analyzer. Varying the delay between the pump and probe photon gives direct acces to the electron dynamics inside the Dirac Cone.

Lifting the spin degeneracy of the surface bands and taking time-inversion symmetry into account leads to a an effect called spin-momentum-locking. This implies that the orientation of the spin of an electron is fixed for a fixed direction of movement. If you compare to electrons moving in opposite directions, then these two electrons need to have opposite spin. It is therefore not easy to backscatter an electron, because you would always need a spin-flip.

With all these special electronic properties, topological insulators are a class of materials for a diverse field of new applications. They are especially promising for realization of spin currents and spin transport. Our group is investigating topological insulators with two-photon photoemission, because this method allows us to directly investigate the dynamics and lifetimes of electrons inside the dirac cone. Using 2PPE, we were able to show that for the two materials Sb2Te3 and Sb2Te2Se there is indeed a linear dispersing surface state and that transport from the surface to the bulk seems to play a substantial role for the electron dynamics inside the dirac cone.

Heterostructures of transition metal dichalcogenides (TMD) represent a very fascinating model system of well-defined semiconductor interfaces. Recent advances in the isolation and manipulation of atomically thin sheets of two-dimensional crystals have ushered into a new era of basic research and technological innovation. Initiated by the first successful preparation of graphene, this field has been stimulated further by the discovery of the indirect to direct bandgap transition for single-layer TMD. In TMD monolayers, the confinement of electronic motion into two dimensions and the suppression of dielectric screening gives rise to an unusually strong Coulomb interaction resulting in excitons with giant binding energies of several hundred meV and ultrashort radiative lifetimes. As a consequence, many fascinating physical phenomena have been reported in different van-der-Waals heterostructures within the last decade. In particular, TMD monolayers provide an unique platform to investigate and control the valley degree of freedom associated with the energetically degenerate K and K’ valleys, which are formed at the extrema of the valence and conduction bands in the hexagonal Brillouin zone.

Understanding the dynamic interplay and evolution of charge, spin and valley excitations in these van-der-Waals heterostructures is therefore of fundamental scientific interest. But it is also of central importance for many potential applications of TMD materials in optoelectronics, spintronics and valleytronics. We are studying the charge-carrier dynamics in TMD monolayers and heterostructures by means of time-resolved two-photon photoemission and time-resolved second-harmonic generation.

We have recently introduced a new experimental concept for investigating ultrafast charge-transfer processes in two-dimensional TMD heterostructures by means of optical pump-probe second-harmonic microscopy. Our technique combines the advantages of time-resolved SHG with an optical microscopy setup. On the one hand, it allows for pump–probe experiments in µm-small and spatially inhomogeneous structures with a superior time resolution. On the other hand, the tensorial nature of the second-order nonlinear susceptibility enables structural characterization of crystal orientations and heterostructure stacking angles. But most importantly, it allows us to distinguish the response from differently oriented layers to elucidate interlayer charge transfer in TMD heterostructures. By changing the photon energy of the pump photons, our technique can reveal a very clear picture of the ultrafast charge-transfer process. This has been demonstrated for a rotationally mismatched WSe2/MoSe2 heterostructure, where directional interlayer hole transfer from WSe2 to MoSe2 and vice versa was found to appear within few hundred femtoseconds. Much faster charge transfer has been observed in MoS2/WSe2 heterostructures with different stacking angles. Here, electron transfer from WSe2 to MoS2 is found to depend considerably on the stacking angle with the fastest transfer time observed to be as short as 12 fs. At higher excitation energies, ultrafast hole transfer from MoS2 to hybridized states at the Γ-point or to the K-points of WSe2 has to be considered. Surprisingly, the corresponding decay dynamics show only a minor ependence of the stacking angle indicating that radiative recombination of indirect Γ-K excitons becomes the dominant decay channel for all samples independent of the stacking angle. Our results, thus, demonstrate that SHG imaging microscopy enables systematic investigations of the charge transfer in dependence of the rotational layer mismatch in TMD heterostructures. In particular, the previously unattainable time resolution of 10 fs is of fundamental importance to investigate the stacking dependence of the ultrafast charge transfer across these two-dimensional semiconductor interfaces.

Experimental setup of SHG imaging microscopy. The two laser beams, pump (green) and probe (red), are focussed collinearly onto the sample. The specular reflected SH response (blue) generated by the probe beam is imaged optically magnified by a camera lens on an electron-multiplied CCD chip. The time-delay between pump and probe beam is varied by a motorized delay stage. The polarization of pump and probe beam can be varied by means of λ/2-plates. The typically  detected p-polarized component of the second-harmonic light is separated by an analyzer. In our time- and polarization-resolved SHG measurements, we can simultaneously image the SH response of large sample areas of about 400×400 µm2 without the need of any mapping or scanning. The two images compare optical microscopy with the respective SHG microscopy for the example of a MoS2/WSe2 heterostructure.